Paris, Venice, and Florence are classics, but if you’ve already visited them and wish to go somewhere new, these eight destinations should provide the quiet romance that you’re looking for.

Just a half hour drive from Ljubljana, you can find Bled, a town named after its lake. This Slovenian resort town at the foot of the Julian Alps is a favourite for couples because it offers a lot of accommodation options on the lake, in the middle of which there is an island. The view of the lake is like straight from a fairy-tale, especially in the winter snow. After a walk, enjoy some ‘kremšnite’ or ‘cream cakes’, a local speciality.

A village by a lake with a mountain towering above it – yes, you’ve arrived in Hallstatt, a village in Austria named after the lake on which it lies. Hallstatt is located just under an hour’s drive from Salzburg and, due to it’s rich history, it’s been inscribed on the UNESCO World Heritage List. The town is known for salt production, 12th-century churches, wonderful 16th-century Alpine houses, and a cable car that connects the old Salzwelten salt mine with the lake. 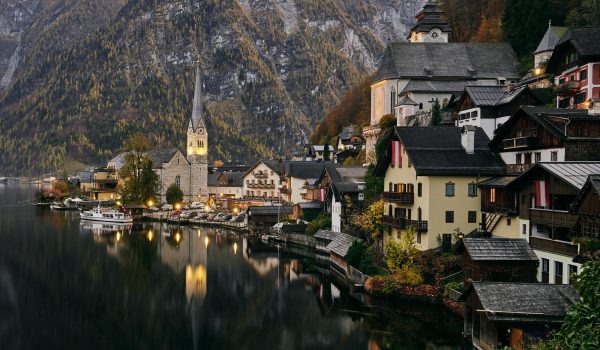 The fishing village of Portofino, located just south of Genoa, is one of the most romantic places on the Italian coast. And we know that there’s plenty of romance in Italy, especially in Venice, Florence, or even Cinque Terre, which is quite close to Portofino.

Portofino is a town ‘in layers’, with houses built into rocks with the Ligurian Sea crashing into them. The main Piazzeta square is surrounded by pastel-coloured houses, boutiques, and restaurants frequented by wealthy visitors who anchor their boats in the harbour.

Rising above the sea, accessible by a cable car, and with a view of the Mt Etna volcano, Taormina’s location allows you to enjoy a magnificent view no matter where you turn. This Sicilian town has been a tourist hotspot for many years. Some people think that its streets and grandiose hotels resemble Opatija in Croatia. An antique Greco-Roman amphitheatre, many good restaurants, a gallery, a fine food shop, and a cake and pastry shop will satisfy every romantic soul seeking peace.

Many newly-weds choose Taormina for their honeymoon because of the magnificent views from the bedroom. Taormina is not a cheap destination, but it’s worth every penny.

If you go to Portugal, especially if you go to Lisbon, don’t miss Sintra, a town which was named the most beautiful place in the world by the poet Lord Byron back in 1809. And he wasn’t wrong. Sintra has castles which look like out of a Disney fairytale and is now protected by UNESCO. Not only does it have fairytale architecture, but all those who are romantic at heart are enchanted by the gardens with over 500 plant species. Perfect for a stroll. 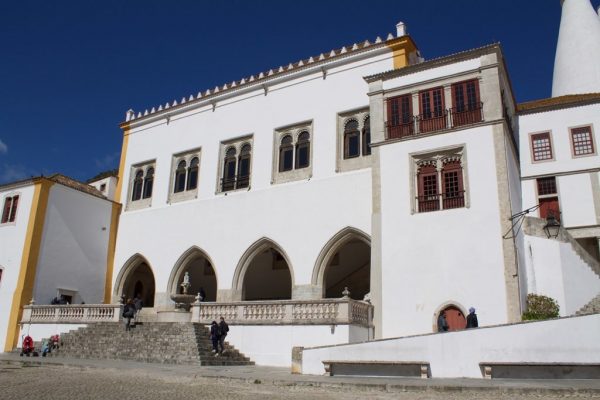 On a wine road in northeastern France, on the border with Germany, you can find the little town of Colmar. Cobblestone roads with pastel-coloured houses, renaissance churches, and peaceful canals with bridges create a wonderful romantic atmosphere, especially if you’ve taken advantage of the benefits of the nearby vineyards.

If you love wine, we recommend that, instead of visiting wineries in the Bordeaux and Burgundy regions, you visit Colmar to discover France’s world of wine. There are no crowds.

Right on the border with Italy, you can find the small Swiss village of Soglio. This is, in fact, ‘the most beautiful village in Switzerland’ – a title given to the village in 2015. The Swiss-Italian painter Giovanni Segantini called it the ‘Heaven’s Gate’. Located high up in the Alps, Soglio will enchant you with its fresh mountain air, cobblestone streets, and the smell of flowers from the garden of the historical 17th-century Salis Palance, which is now a hotel. Palazzo Salis preserved its past interior, including the furniture, paintings, and murals, and in 1998 it was named the Historical Hotel of the Year.

You can take a flight to Amsterdam and then a 1.5-hour car ride to Giethoorn. Giethoorn is a village virtually without cars; it’s known for its canals, walking and cycling paths, and houses surrounded by greenery. This village in northern Netherlands is often called the Venice of the North, but it looks like it came out of a fairytale, a very quiet fairytale. Perfect for a romantic getaway. And yes, they also have gondolas, which you can navigate yourselves.

Previous story
Next story
Where in Europe can you get the cheapest beer?
A weekend in Budapest: Ruin pubs are the best option for a night out
1

The Best Weekend Itinerary for Zagreb

After around a dozen visits and very nearly moving there, Zagreb holds a special place in my heart. It’s a frankly ...
Pročitaj više